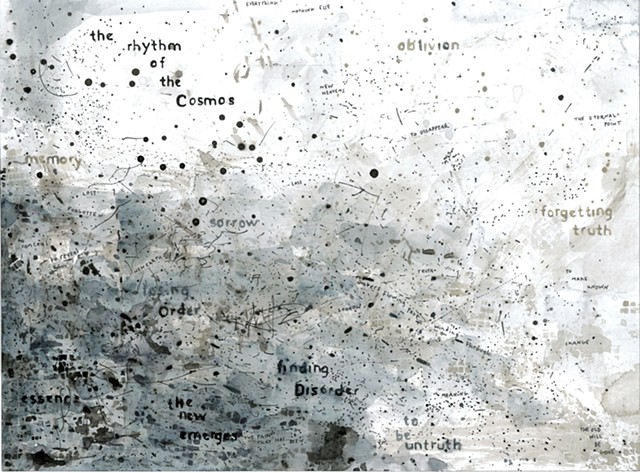 This painting is inspired by Alethia Enlarged by William Marsh

Alethia is truth. Lethe is forgetting. So did the River Lethe cause people to forget, so did its waters, flowing past Hypnos, winding through Hades, loose, and lose, memory. So did it quash, so did it dissipate. That’s its truth: the joy of oblivion. Likewise, Isaiah tells us, will God one day make people forget, forget the pain that has been. Forget all that has gone wrong. Sorrow will be no more, the old will be gone.

We establish truth, but we’ll forget its meaning. We’ll be free.

To conceal is to disappear; to reveal is to make known. But when we make known, we disappear. We uphold present, we ignore the forgotten. Hades has its order, so does God. Each requires truth, each requires concealment. Neither can gain without loss, nor can neither lose without gain. That, after all, is their point: to lose their way.

And we go along.

Alethia is the Greek word for truth. Lethe is the word for forgetting. Curiously enough, lethe is derived from alethia. Hence, to forget is to, literally, be “untruth.” From the standpoint of the afterlife, however, be it Greek (Hades) or Christian (Isaiah 65:17, “For behold, I create new heavens and a new earth; and the former things will not be remembered or come to mind.”), the life after death is about forgetting. It’s about losing memory, the memory of the bad and abandoned, the memory of suffering and pain. To see such things “become” oblivion (the opposite of what The Fault with Our Stars protagonist Augustus Waters who, upon learning he had terminal cancer, meant when he said that he did not want to go into oblivion), lost and forgotten forever.

In this “loss,” we will be free. For according to either afterlife, we will know the truth. Nothing else will matter. The final point, the ultimate meaning will be apparent. All else will be subsumed into it. And yes, whether we are wrapped in the umbra of Hades or glowing in the light of Heaven, we will, in a way, “forget” what truth, as we understood it on earth, means: no longer will it just be the eternal point. It will be everything. It will overwhelm it all.

On the final paragraph, think about the principle of physics that we cannot observe an object without changing it. And the principle that we cannot measure position and velocity at the same time. In other words, when we reveal, that is, when we observe an object and it “reveals” itself to us, we change it. Sometimes the change is subtle, sometimes it’s obvious. We reveal it as much as we conceal it, the new emerges, the old fades. We lose, we gain. When we try to pinpoint or step into order, we miss it. We find velocity, we miss position; we find an object, we lose its essence. But we always find something. We always find a new order.

As the recent sighting of a black hole devouring another black hole tells us, when we lose order, though we may find disorder, we might also, if quantum physics’ predictions are remotely accurate, find a new universe. Lose order, finding disorder: it’s the rhythm of the cosmos.